Throughout the year and leading up to the 2021 NFL draft, we will update our Tennessee Titans Mock Draft Roundup showing picks for the Tennessee Titans from several prominent sites and draft analysts.

Before his announcement to return to school, Olave was often listed in 2021 first-round mock drafts. By returning to school, Olave has a chance to become the first receiver off the board in 2022. Olave isn't the biggest receiver (6-1, 188), but he is one of the best route-runners in college football and has outstanding hands and speed.

Looking ahead to the 2022 NFL draft the Tennessee Titans could address a few different positions. One of them might be on the offensive side of the football, as the Titans might look to add at either wide receiver or tight end given the departures of Corey Davis and Jonnu Smith.

But they could also look to bolster the pass rush off the edge, leading them to USC's Drake Jackson. He started at defensive end as a true freshman in 2019, and then transitioned into an outside linebacker role for the 2020 season, notching 20 tackles and a pair of sacks in just six games. For his efforts he was named to the All-Pac-12 second team. He could be a perfect addition to the Tennessee defensive front.

The rising junior is going to head into the season as WR1 on the PFF draft board. He's so smooth as a route-runner and already displays high-level nuance. He racked up 723 yards and six scores in eight games last season.

Throughout the 2021 NFL season, we will compile a consensus NFL Power Rankings that averages the rankings of all 32 NFL teams.

Here is where the Tennessee Titans rank in terms of average, best and worst:

Below you will find a Week 6 roundup for the Titans in our consensus 2021 NFL Power Rankings.

How they've improved: Fulton didn't play much last season as a rookie because of a knee injury, but this season he has settled in nicely as the Titans' starting right cornerback. He has one interception and six passes defensed through five games. Fulton's best performance was in Week 2, when he held Seahawks receiver DK Metcalf to one reception for 8 yards. The second-year CB has gained confidence, and it shows in his consistent play on the field. -- Turron Davenport

The Big Dog is still The Big Dog. Any attempts to fade The Big Dog will result in the stern reminder that The Big Dog is not to be disrespected under any circumstances. Derrick Henry rushed for 159 yards and three touchdowns, another mighty performance in a 37-19 win over the lowly Jaguars. Henry is on pace to set the NFL record for carries and rushing yards this season, and it's hard to imagine an otherwise ordinary Titans team turning away from the one thing that makes it special. This stat, from CBS: Henry just completed the most productive 40-game stretch by a running back in NFL history. His 4,792 yards over the span is just ahead of Jim Brown (4,759). Jim Brown.

Below you will find the weekly NFL regular-season schedule for the Titans in 2021.

The table below are all of the 2021 NFL Draft picks selected by the Tennessee Titans.

The chart below displays the Fantasy Football Average Draft Position (ADP) movement over the past 30 days for Tennessee Titans running back Derrick Henry in 12-team standard-scoring formats. 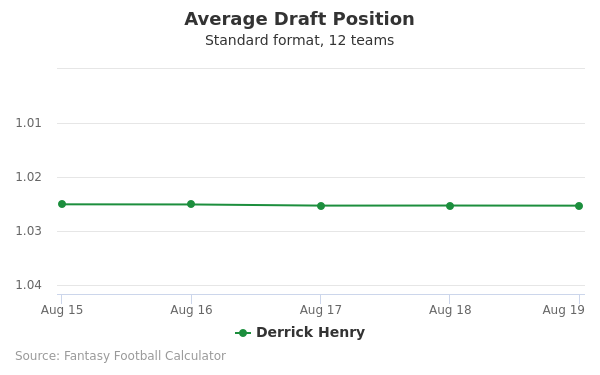